My favorite time to be in Seville is Semana Santa. Every year at this time I grow nostalgic for late March 2005. I loved being part of the crazy crowds holding their collective breath as the palio dips down to clear the arch of main door of the church. The quick  gasp of terror as it appears to fall only to be caught and pushed back up level.

Looking for my photos from the 2005 Semana Santa I came across this article written by my son, Jonah Bailey. Jonah lived in Seville Spain for 15 years before relocating with his family to Grand Rapids, Michigan in 2011. Thank you, Jonah Bailey, for allowing me to share:

Semana Santa – “Holy Week” – is the period preceding and including Easter. Between Palm Sunday and Easter Sunday, Sevilla turns into a city “held hostage” by ritual. Although these rituals are centered on the death, death and resurrection of Jesus Christ and the worship of the Virgin Mary, it would be hard to say that the fervor and devotion shown during this week has much to do with Roman Catholicism or even God. It is a week of tradition; a time where being “Sevillano” means something special and social life is lived between processions in the bars and cafés of the city.

This is where Semana Santa starts for most people. On the Saturday before Palm Sunday, all the chapels, temples, basilicas and churches from which holy week processions will leave are open for people to visit the religious icons and images that will be carried through the streets of the city.

Crowds are a guaranteed during Semana Santa. The overall population of the city swells exponentially, all the hotels are full and there are too many cars… But people are in the street and a good time is to be had by all. Forget what you wanted to do in the centre of town this week. You’ll be stopped at every turn by the famous “bulla” (sudden apparition of thousands of bodies to see a procession) and you’ll be endlessly frustrated by the amount of time it takes you to get to where you want to go. Just enjoy the week’s festivities and don’t make a lot of plans to get things done.

I know they look like members of some strange order of the KKK, but I assure you they aren’t. They are “Nazarenos”, members of “Hermandades” that organize these processions during Semana Santa. Their garb pre-dates the KKK by a quite a few centuries. It takes time to get over the weird feeling you get when you see them. There are between 300 and 3000 Nazarenos in each procession. They usually hold very tall candles called “sirios”. Their livery varies in color depending on the hermandad.

After a bunch of Nazarenos, the Cristo comes out. Every procession has these big float like platforms called “pasos” Most processions have two pasos: a Cristo and a Virgen. The Cristo can be a depiction of the crucified Christ or a scene from one of the Stations of the Cross. The Virgen is a depiction of one of the many apparitions of the Virgin Mary. The pasos are carried by 18-30 men called “Costaleros”. They carry the pasos on their backs and are located underneath.

The Cristo is usually followed by “Penitentes”. Penitentes carry crosses during the procession in penance for some sin or to fulfill a promise made to God. Some carry more than one cross. I saw a guy carrying 6 crosses strapped together this year. He must have felt really guilty about something or be really thankful for something. 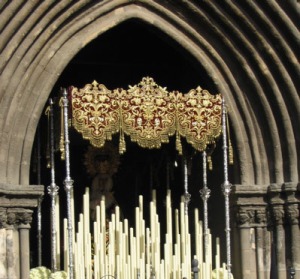 After Penitentes and more Nazarenos comes the “Palió”,  the paso that carries the image of the Virgin Mary.

This is a particularly famous image called “La Virgen de la Macarena”. Her Basilica is pretty close to our house, so we run into her every year. Her procession comes out in the wee hours of Thursday night/Friday morning and lasts over 13 hours. Devotion to her is unparalleled. I’ve talked with people that don’t believe in God, but they believe in the Macarena!

The Macarena has her own legion of Roman soldiers. They precede the Virgen with wailing trumpets and pounding drums. These guys are the party animals of Semana Santa. They are usually a hundred strong at the beginning of the procession, but very few actually finish it the following day. Most get lost in the cafés and bars of the city living it up with friends. One big party!

Maundy Thursday is a day of morning in Spain because of the crucifixion of Christ. All the women dress in black and most wear a large comb in their hair on which they drape a huge black lace veil. Men wear black too, usually three-piece suits. 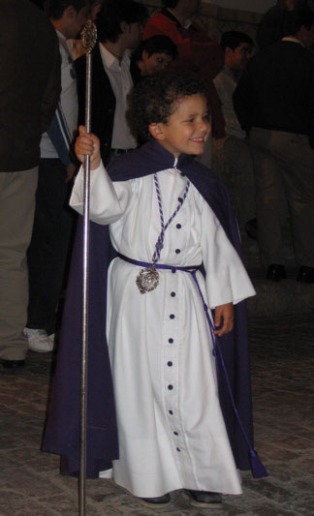 Semana Santa involvement is something that is passed down from generation to generation. No belief is really necessary. We have friends that have converted to Buddhism, but continue to be in two processions in the city. They have already passed this tradition on to their children.

It’s gotta be great. You get to dress up, be the centre of the attention, stay up late, no school, loads of candy and good food to be had every day. Who wouldn’t want to be a kid during Semana Santa in Sevilla? I wonder what our family traditions will be when our little one gets to be this age?  (2005)

(It is now 2013 and Jonah and Heather have not one but two little ones.)

Jonah Bailey: As a student of European history, a practitioner of design thinking and an intense interest in the way things work, I bring an unusual perspective to any project. I blend a taste and skill associated with aesthetic classicism with the latest front end development techniques available and mix them with a passion for solving complex problems in the best ways. http://jonahbailey.com/